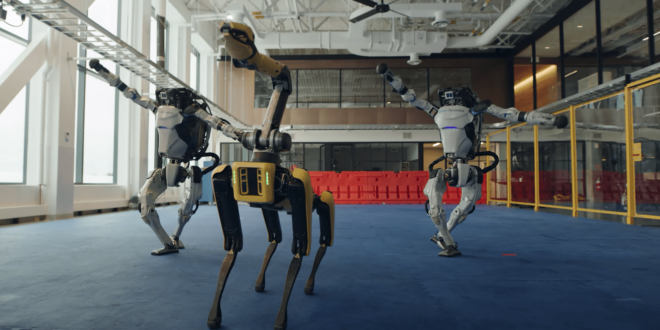 Boston Dynamics robots now they can also dance! We have seen them run, open doors and go for a walk but in a new video released by the company the robots dance to the classic hit “Do You Love Me”.

The new video presents the three Waltham robotics company robots — the humanoid Atlas, the dog-shaped Spot, and the box-juggling Handle — all come together in a coordinated dance set.

The company has recently started selling the Spot robot for the considerable price of $74,500.

The Atlas and Handle robots featured in the video are still research prototypes.

Boston Dynamics was purchased by Hyundai, from SoftBank in a $1.1 billion deal. Boston Dynamics was founded in 1992 in Waltham Ma. as a spin-off from the Massachusetts Institute of Technology (MIT), where it became known for its quadrupedal robots (the DARPA-funded BigDog, a precursor to the company’s first commercial robot, Spot.) It was bought by Alphabet’s X division(GOOGL) in 2013, and then by Softbank in 2017.