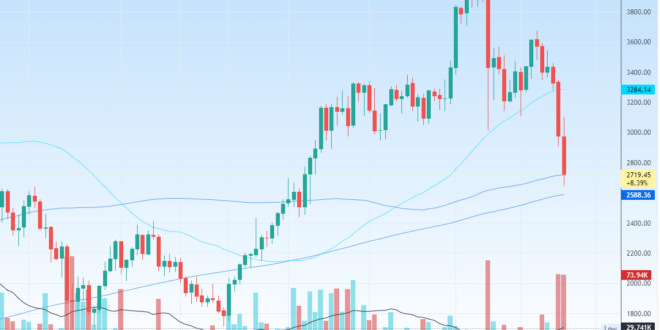 Ethereum price is under severe selling pressure after the markets close. ETHUSD is now down 8.5% at 2748 hitting the daily low and the lowest level since August 6.

In Wall Street, the major indices ended at the daily low with Dow Jones and S&P 500 turning red after spending the entire trading session in positive territory. Investors fear that the liquidity crisis at Chinese real estate developers Sinic and Evergrande would lead to global contagion.

J.P. Morgan analysts claimed that Ethereum (ETHUSD) is trading well above its fair value, based on Ethereum’s network activity and rising concerns about competition with other DeFi platforms. Strategist Panigirtzoglou, said that ETH fair value is around $1,500.

LimeWire today announced it has selected the Algorand blockchain to power the relaunch of its digital collectables marketplace. As the first carbon-negative blockchain, Algorand has become the network of choice for energy-efficient NFT marketplaces and the Web3 creator economy.