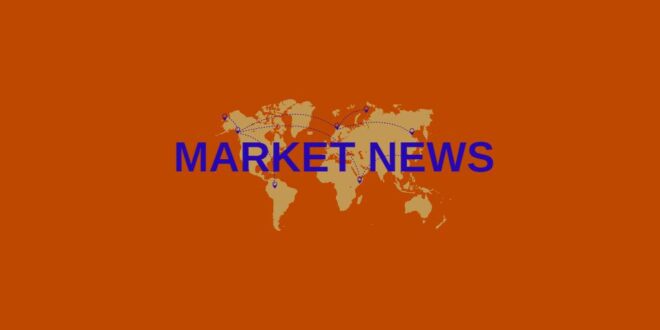 Crypto lender CoinLoan introduced a reduction of the account withdrawal limit due to a spike in withdrawals of assets.

Ukraine Puts Its Immediate Funding Needs at Up to $65 Billion

Kremlin: Russia’s President Putin will not congratulate Biden on July 4

Vauld Cryptocurrency exchange had suspended all withdrawals, trading and deposits on its platform with immediate effect

Eurozone Preliminary Inflation soars 8.6% in June – above the expectations of 8.4%

Gazprom cancels dividend for the first time since 1998, shares DOWN 30%

FTX may be exploring a deal with Robinhood. HOOD shares jump 14% and are halted on the reports

Russia Defaults on Foreign Debt for First Time in a Century

Elon Musk: Tesla Reducing Salaried Workforce By 10% Over Next 3 Months

NATO Chief, Jens Stoltenberg: The war in Ukraine could last “for years,”

ECB to hold an unscheduled meeting to discuss market turbulence

World Bank: Global Growth Will Be Choked Amid Inflation and War

MoneyGram has partnered with Stellar to allow users to convert fiat

British government has authorized the sale of Chelsea Football Club

Biden: US would intervene militarily if China invades Taiwan

Trudeau to reportedly ban China’s Huawei from 5G in Canada

Finland and Sweden will submit their NATO bids today

Ukraine declares ‘combat mission’ over in Mariupol amid evacuation

Finland moves to join NATO ‘without delay’ after Ukraine invasion

Beyond Meat stocks drop 22.35% to $20.20 after disappointing earnings and revenue

Germany’s Industrial Production came at -3.9% in March below the expectations of -1%

Lyft ($LYFT) stock is 34% down at $20.15 after disappointing guidance for the second quarter

More than 5.000 javelins are arriving in Ukraine by Friday

Foreign Minister: Russia Not Seeking to End Ukraine War by May 9

Russia introduces the Ruble in the Kherson region of Ukraine

Finland To Donate Seized Bitcoin Worth $77 Million To Ukraine

USDRBL hits the lowest level since May 2021

Hackers reportedly stole $1.3 billion worth of crypto and digital assets in Q1 2022

Austria agrees to pay for Russian gas in rubles

Gazprom: Halted Gas Supplies To Bulgaria And Poland Due To Lack Of Payment In Roubles

Elon Musk to explore potential tender offer for Twitter, has $46.5B in committed financing for potential deal

Lavrov Denies Russia Could Use Nuclear Weapons in Ukraine

IBM beat on earnings and revenue. The stock is adding 2.21% at 132 aftermarket

Russia threatens Zelensky: ‘We will strike decision-making centers’ in Ukraine

Biden authorizes an additional $800 million in military assistance for Ukraine

Meta (facebook) is “racing” to release AR glasses in 2024

S&P: Russia has defaulted on its foreign debt

World Bank: Russian invasion to cut Ukraine’s GDP by over 45% this year

Elon Musk decides not to join the Twitter board, says CEO Parag Agrawal

Zelensky: Moscow to regard absence of painful sanctions package as permission to go further

US Defence Official: Russian Forces Near Kyiv Have Completed Their Withdrawal From The Area

Germany Factory Orders came in at -2.2%, below the forecasts of -0.2% in February

U.S. to send $100 million in Javelin missiles to Ukraine

UK, Australia and US agree to ‘accelerate development’ on hypersonic missile technology

Poland Prime Minister: Germany Is The Main Roadblock When It Comes To Imposing Tougher Sanctions On Russia

Series of explosions heard in Ukrainian port of Odesa

Death toll rises to 35 from a strike on a government building in Ukraine’s Mykolaiv, governor says

Biden: Corporations and the super-rich must pay their fair share

Zelenskyy: Regrouping is part of Russia’s tactics, battles lie ahead

White House: In the coming days the commerce department will take further action against Russia

Russian Central Bank: Russia’s foreign currency and gold reserves have plunged by more than $38 billion since the Ukrainian war began

IMF: Russia sanctions threaten to erode the dominance of US dollar

Russian Defence Ministry: Regrouping Of Forces Is To Focus On Key Front, Complete ‘Liberation’ Of Donbas

Ukraine’s ambassador tells U.N. the ‘demilitarization of Russia is well under way’

Pentagon: There has been some movement by a small number of Russian forces away from Kyiv

Ripple Co-Founder Chris Larsen, alongside other crypto billionaires, are lobbying to change the Bitcoin code to reduce its environmental impact

Victoria’s population shrank by almost 45,000 at the pandemic’s height

German Gfk Consumer Confidence Survey came in at -15.5, below the expectations of -12 in April

Fertilizer price surges 43% to a fresh record as supplies tighten

European Commission: EU will remain dependent on Russian energy resources until at least 2027

Zelenskyy is ready to discuss Ukraine neutrality with Russia

Turkey closes Bosphorus to ships after suspected mine

Zelensky: Ukraine will not give up territory as the price of peace

Russia says first phase of operation is over, will focus on liberation of Donbass region

Economy Minister Robert Habeck: Germany “will halve its imports of Russian oil by the summer”

Swiss freeze more than $6 billion worth of sanctioned Russian assets

US Pres Biden: Russia should be removed from G20

US is expected to announce plans to welcome up to 100,000 Ukrainian refugees and others fleeing the war

NATO official estimates that 40,000 Russian troops have been captured, injured, or killed

US investment bank Cowen has launched a Bitcoin and cryptocurrency unit

Tetris has filed a trademark application for NFTs and the metaverse.

Putin: Russia will only accept rubles for gas deliveries to Europe

Poland expels 45 Russian ‘spies pretending to be diplomats,’ in escalation over Ukraine invasion

Trafigura co-head of oil: I think you will see $150 a barrel oil this summer.

Japanese crypto exchange Coincheck will be listed on NASDAQ

Zelenskyy: Russian forces see Ukraine as the gate to Europe

Biden says Putin could use chemical, biological weapons in Ukraine

COVID-19 cases are expected to rise due to the BA.2 subvariant

Russian Foreign Ministry has summoned the US Ambassador

Americans can get $5 million for informing on Russian oligarchs’ assets

Kyiv says 228 killed in capital since start of war, including four children

Boris Johnson: West must not normalise relations with Putin again

France has raised its nuclear alert

Putin hails Crimea annexation and war with lessons on heroism

Russia Strikes Near Lviv Airport as Bombardment Expands Across Ukraine

Spotify set to integrate NFTs into its streaming platform

Schwarzenegger to Russians: You’re being fed misinformation about this ‘illegal war’

Russians have up to $213 billion stashed offshore in Swiss banks

Medvedev: Russia will put its enemies such as United States in their place

Visa has launched a crypto development program, and it’s seeking new college grads for it

EU agrees on the fourth package of restrictive measures against Russia

UK Unemployment Rate drops to 3.9% in January, better than the 4.0% expected

IMF: Ukraine economy could shrink as much as 35%

Russian Defence Ministry: The city of Mariupol has been unblocked, mass evacuations have begun – Interfax

Official Talks between Russia and Ukraine Are Paused Till Tuesday

Russia prosecutors threaten to arrest, imprison US business people in the country

Slutsky announced significant progress in the negotiations between Russia and Ukraine

Poland’s President says it will be a ‘game changer’ if Putin uses chemical, biological or nuclear weapons in Ukraine

Zelensky: 1,300 Ukrainian soldiers have been killed in “war of annihilation”

Advisor to the Mariupol mayor estimates that the death toll from the Russian bombardment of the city may have already reached 10,000

Russia’s Deputy FM: Russia had informed Washington that weapons supply convoys into Ukraine are ‘legitimate targets’ for the Russian military

Most Russian shelling near Kyiv since the war started – Fox News

UK Ministry of Defense intelligence: The bulk of Russian ground forces are now 25 kilometers from the center of Kyiv

Zelenskyy: There are so many POWs that the government has set up a special headquarters

US Defence Dep. Spokesman Kirby: Russians are beginning to make ground momentum toward Kyiv from the East

Zelensky: Ukraine has reached a strategic turning point in the war. Time and patience are still needed until victory is achieved.

Goldman Sachs to Shut Down Operations in Russia

ECB Lagarde: Inflation to rise further in near term

Bill Gates on Bitcoin investing: ‘If you have less money than Elon, watch out’

Dubai has approved a law to regulate Bitcoin and cryptocurrencies

Russia has put its Eastern Naval forces on a defensive posture

Austria suspended the law that made coronavirus vaccinations mandatory

Biden to sign executive order to outline US cryptocurrency strategy

Poland Says It Would Make Its MiG-29 Combat Jets Available to the U.S.

McDonald’s closes all restaurants in Russia

Third round of talks between Russia, Ukraine fail to break deadlock

Coinbase has blocked over 25,000 addresses related to Russian individuals or entities engaging in illicit activity

Ukraine says China is ready to act as a peacemaker

EURUSD hits the lowest level since May 2020

Ukraine suspends the export of meat, buckwheat, sugar, and other products

US Defense Official: Since the beginning of the invasion of Ukraine Russia has launched around 600 missiles

Netflix suspends all services in Russia

Blinken: Ukraine has a “continuity of government” plan if Zelensky is killed

Russia warns against allowing Ukrainian military to use foreign airfields

Mariupol without power or water, says mayor, as Ukraine accuses Russia of blocking the humanitarian corridor

Russia-Ukraine talks to resume on Monday

US Treasury Secretary Yellen: I believe the Fed can reduce inflation without causing a recession

Airbnb is suspending all operations in Russia and Belarus

Ukraine Government to sell NFTs to fund war against Russia

France to remove masks and COVID19 vaccine passes on March 14

Russia’s Lavrov: A third world war would be nuclear, destructive

Germany Unemployment Rate s.a. came in at 5%, below the forecasts of 5.1% in February

Harley-Davidson suspends all business and shipments to Russia

Russia suspended from all Fifa and Uefa competitions until further notice