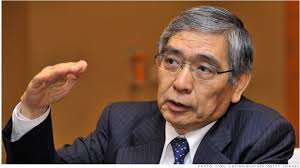 Central banks can overcome the zero lower bound, as long as the policy maker commits decisively to fulfilling its mandate with well-designed unconventional policy measures

It has become a common understanding among central banks that unconventional monetary policy, despite some lingering skepticism from academic front, has proven to be effective

Inflation is widely perceived to be ultimately a monetary phenomenon, so creation of a massive quantity of money would be a strong signal of a central bank’s commitment to fighting deflation

Central bank’s strong commitment to policy objectives, clear and consistent communication, and decisive action to fulfil the commitment would collectively be powerful enough to have significant impact on inflation

Am confident BOJ can achieve its inflation target with “unwavering determination”

Commodity Futures Trading Commission today filed a civil enforcement action in the U.S. District Court for the District of Hawaii against Gregory Demetrius Bryant, Jr., formerly of Hawaii, for fraudulent solicitation, misappropriation, operation of an unlawful commodity pool, and failure to register with the CFTC.