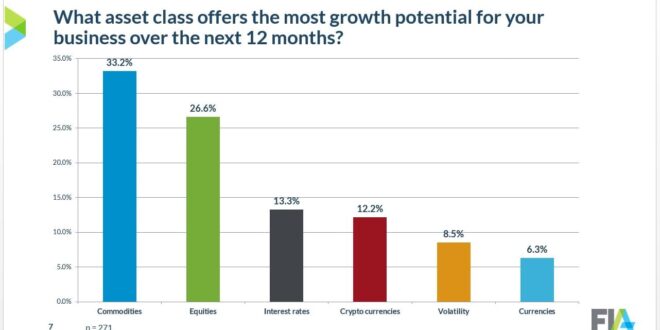 FIA conducted a survey at the beginning of 2021 to assess the outlook for the global cleared derivatives industry. The survey gathered feedback from people working at banks, brokers, exchanges, technology vendors and other firms that support the trading and clearing of derivatives such as futures and options.

The purpose of the survey was to gauge sentiment in four areas:

FIA conducted the survey during January and February. Responses were collected on an anonymous basis. A total of 274 responses were received, with 57% from the Americas, 31% from Europe and the Middle East, and 12% from the APAC region.

The responses came primarily from firms that are directly involved in supporting the infrastructure of the global cleared derivatives markets, with 22% from exchanges and clearinghouses, 34% from banks and brokers that serve as intermediaries for customers accessing these markets, 22% from technology vendors and service providers, and 14% from asset managers, commodity suppliers and proprietary trading firms.

Regionally, respondents in the Asia Pacific region and the Americas were more confident of growing volumes over the next 12 months, with 72% and 70% expecting an increase, respectively. In contrast, only 56% of the respondents in the EMEA region expected trading volume to increase.

When asked which region has the greatest potential for growth, 45% of all respondents said Asia Pacific and 36% said the US. This finding is in-line with recent trends in trading activity. In 2020, the total number of contracts traded on exchanges in the Asia Pacific region jumped 39% from the previous year, with exchanges in China and India accounting for most of that increase. Meanwhile, trading on North American exchanges rose 25% from the previous year, with a surge in retail trading of equity futures and options offsetting a decline in the trading of interest rate contracts.

Not surprisingly, respondents in Asia Pacific were the most optimistic about that region, with 82% seeing APAC as having the highest potential for growth over the next 12 months. On the other hand, respondents in the Americas were more split, with 49% favoring the US and 36% favoring APAC. The EMEA region’s participants were the most evenly balanced in their views, with 45% favoring APAC, 23% EMEA and 22% the US.

When asked which asset classes have the greatest potential for growth, 33% of all respondents said derivatives based on commodities and 27% said equities. These two categories both set records in 2020 for the annual number of contracts traded. In addition, these two categories are likely to gain as economic activity returns to normal over the course of 2021.

The most cited issue was the pandemic’s impact on business. Although the derivatives markets were able to continue operating during the pandemic without significant disruption, the health of these markets is closely tied to the level of economic activity. Many institutional investors pulled back from trading derivatives during 2020, particularly interest rate derivatives, and commercial hedging was curtailed in several important commodity markets.

Second on the list was political risk, a sign that many industry professionals are worried about the potential impact of new legislation and regulation. This is especially true in the US, which at the time of the survey was undergoing a transition to a new administration. It also may reflect ongoing concerns about economic disputes between the US and China, which have led to new restrictions on certain types of cross-border trading.

Third on the list was technological disruption. Although this issue is not new, several recent developments have brought it to the fore, notably the emergence of new forms of retail trading, rapid advances in the use of the cloud, and greater use of artificial intelligence in many parts of the trading lifecycle.

Drilling down to responses by type of firm, respondents working at bank-owned clearing firms listed capital requirements as their top concern, ahead of the pandemic, political risk and technological disruption. This reflects the impact of the Basel III capital requirements on the cost of providing clearing services to clients. These requirements apply only to banks, but they also have an indirect effect on clients by reducing the capacity of bank-owned clearing firms to take on more risk. That helps explain why market-making firms, many of which rely on banks to clear their trades, cited capital requirements as the second-most important issue facing the industry after political risk.

The survey also revealed several insights on the impact of Brexit. Only 16% of the respondents cited market disruptions related to Brexit as one of the top three issues facing the industry. This may reflect the fact that at the time the survey was conducted, many firms had already relocated staffing and reoriented their trading and clearing systems in anticipation of the UK’s departure from the European Union.

Instead, the respondents flagged the potential for regulatory conflicts and compliance issues as a more critical problem for the industry, given that many firms will need to comply with both UK and EU rules in order to continue serving their customers. When asked to identify their top concern about the impact of Brexit on the derivatives industry, 51% said regulatory conflicts and compliance costs, 23% said market fragmentation, and 19% said higher costs to run their businesses.

The survey revealed significant concerns about two other issues facing the industry — cyber risk and market data. Roughly one third of all respondents ranked cyber risk as one of the top three issues facing the industry, a sign that people in the derivatives industry are worried about the risk that cyber criminals will penetrate networks, access confidential files, and disrupt markets. Another 24% included the cost of market data in their list of the top three issues facing the industry. Market data is essential to trading and clearing operations, and the exchanges that produce these data derive a large and growing part of their revenues from the sale of these data. That is leading to friction between market participants and the exchanges over the cost of these data.

The survey included several questions to gauge industry sentiment around emerging business opportunities in two areas: the rapidly growing futures markets in China, and the emerging markets for digital assets such as bitcoin.

Breaking this down by type of firm revealed important differences. Two thirds of the respondents working at commodity firms said their firms are already active in China’s futures markets, more than any other segment of the industry. Asset managers, on the other hand, are mainly watching with interest but have not yet committed to entering these markets. Among intermediaries, 44% of the people working at clearing firms, both bank and non-bank, said their firms are already active in these markets, and another 7% said they expect to enter in the next 12 months.

The survey also asked respondents for their views on the regulation of digital assets. Uncertainty around this issue has been one of the main obstacles to greater involvement by firms in the derivatives industry. 40% said policymakers should clarify regulatory jurisdiction and oversight of these products and write new rules accordingly. 37% said regulators should treat these assets like other financial instruments and enforce compliance of existing rules and regulations. 17% called for the industry to set its own standards and regulate itself. Only 6% called for a laissez faire “do no harm” approach and allowing this sector to develop without regulation.

One of the key lessons that the derivatives industry learned from the pandemic is that the burst in trading volume that took place during March put a heavy burden on operational capacity, leading to delays in the settlement of trades. The experience highlighted the need for more investment in the technologies used to process trades after execution.

To gather more information about this trend, the survey asked respondents to identify the areas in the trading and clearing process that are most in need of innovation and modernization.

Post-trade processing was at the top of the list, reflecting the awareness in the industry that legacy technology has become a significant obstacle to the efficient processing of trades. Although the vast majority of trades are processing on a straight-through basis, a small number require manual intervention to correct errors and allocate positions properly.

Regulatory compliance came in second. In recent years, reporting requirements have increased in complexity, making it more important than ever to gather data efficiently. In addition, the explosion of trading volume has intensified the need for advanced tools to sift through millions of transaction records.

Two areas tied for third — risk management and collateral management. Risk management refers to the systems that firms use to monitor risks in trading. Although some firms have developed systems to manage risks on a near-real-time basis, this area continues to be a challenge for the industry. Collateral management refers to the movement of cash and securities to meet margin requirements. Some firms have begun transforming key elements of this process through the use of cloud computing and distributed ledger technology, but this trend is still in its infancy. 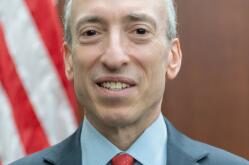 Thank you for the kind introduction. It’s good to be back with the American Bar Association’s Derivatives and Futures Law Committee.